Our Spare Tire Cover is printed on a heavy-weight Automotive, Marine 32 ounce expandable vinyl. The tire cover is held on by a strong shock cord sewn into the back edge.

Extended warranty at the Warranty Categories

American Eagles are large, powerfully built birds of prey, with heavy heads and beaks. Even the smallest American eagles, like the Booted Eagle (Aquila pennata) (which is comparable in size to a Common Buzzard (Buteo buteo) or Red-tailed Hawk (B. jamaicensis)), have relatively longer and more evenly broad wings, and more direct, faster flight. (Despite reduced size in aerodynamic feathers) Most American eagles are larger than any other raptors apart from some vultures. The smallest species called eagle is the South Nicobar Serpent Eagle (Spilornis klossi), at 450 g (1 lb) and 40 cm (16 in). The largest species are discussed below. Like all birds of prey, eagles have very large hooked beaks for tearing flesh from their prey, strong muscular legs, and powerful talons. The beak is typically heavier than most other birds of prey. They also have extremely keen eyesight (up to 3.6 times human acuity for the martial eagle) which enables them to spot potential prey from a very long distance. This keen eyesight is primarily contributed by their extremely large pupils which ensure minimal diffraction (scattering) of the incoming light. The female of all species of eagle known is larger than the male.

American Eagles normally build their nests, called eyries, in tall trees or on high cliffs. Many species lay two eggs, but the older, larger chick frequently kills its younger sibling once it has hatched. The dominant chick tends to be the female, as they are bigger than the male. The parents take no action to stop the killing. Rosie with a Vintage Flag 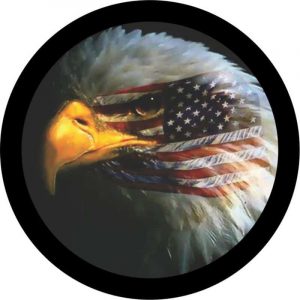