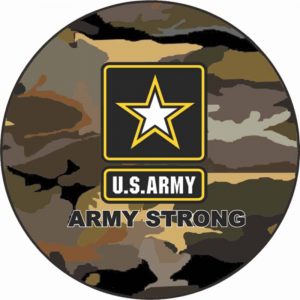 Available on black vinyl only for the U. S. Army Strong Tire Cover w/Camera Hole Option

In 1993, our family moved to Clearwater, Florida.  We moved the business and concentrated mainly on the  Automotive Industry.  In 1997, we opened our first online sales by providing Graphics on spare tire cover(s). Even before shopping carts were invented. Tire-Covers.com started in 2005. Then was incorporated and changed to Custom Grafix Industries, Inc. We settled into giving customers options on Custom Tire Cover(s) before anyone ever offered this for the Jeep, Land Rover, RV’s, Campers, Trailers, Off-Road Vehicles, etc. We are located in Pinellas Park, Florida. Beginning in Dallas, Texas as Fun Time Accessories.